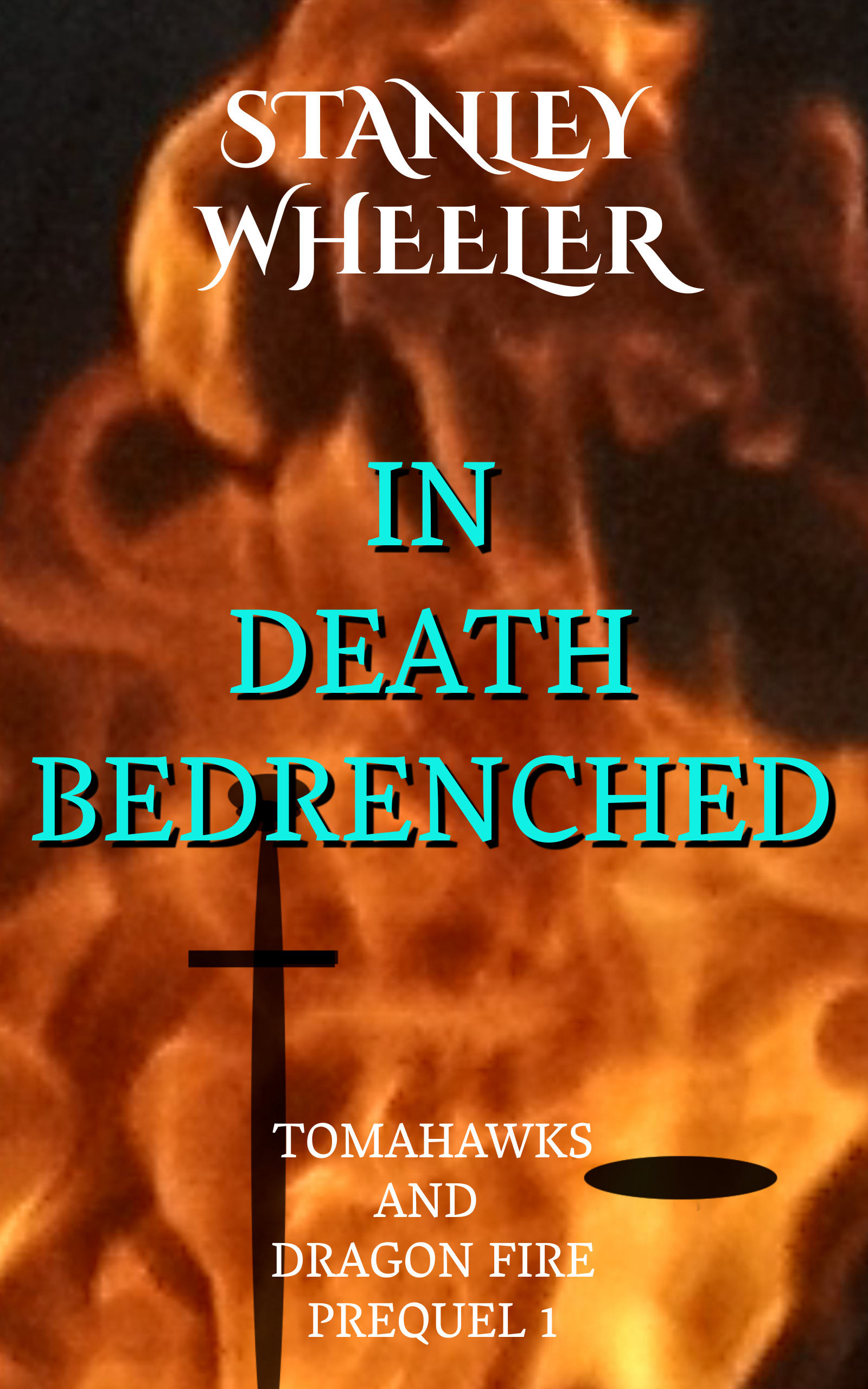 Ulf Thorsen plunged his hand into the frigid waters of the bay and closed his fingers upon the red and silver creature. He stood in the water below the rush of a small river splashing down a series of falls. The cold along the north shore of the Gulf of St. Lawrence meant nothing to him. Although growing up in a small village near Mikilvik—the largest of the towns founded by his Viking forefathers—made him familiar with cold and discomfort, a darker, heavier thing protected him from the near-freezing temperature.

He raised the yard-long monster from the flood. It slashed a razor-finned tail along Ulf’s side. The fins sliced through his shirt and the skin over his ribs. He gripped the thrashing thing behind the tooth-filled jaws. The creature twisted and slashed again. The fins along the sides of the snake-like tail cut through his leather breeches and opened an incision across his thigh.

Ulf gripped the monster in one hand, and a dark round stone in the other. He called upon the power of the stone. The power ran up his arm, creating a sensation of a horde of scurrying mice. It moved across his shoulders and down the other arm to the hand that held the creature. The silver-red scales of the thing might turn spears and bayonets, but they could not withstand the force of Ulf Thorsen’s grip.

The beast wriggled and turned in a frenzy of twisting slashes. The sharp fins cut his shirt once more but missed his skin. The tail whipped up to catch Ulf beneath the upper arm. As blood dripped from the fresh wound, Ulf focused the building power into his grip. His fingers constricted behind the jaws. The shimmering scales spread, splitting apart. Vertebrae crunched. His fingers tore into the monster’s warm flesh. Its blood ran across his knuckles and down his hand and wrist. He continued to squeeze, and the yellow eyes bulged from their sockets. The blood trickled in a wavy path down to Ulf’s elbow and dripped into the bay. The creature hung limp and lifeless.

This was power. This was the joy in life: to feel an opponent’s blood beneath one’s fingers; to feel the life force flee from the cabinet of its soul. This brought pleasure to Ulf Thorsen. The strange creature’s death was but a small thing. He flung it upon the bank. A pair of gray dogs snarled and snapped as they tore into the bloody carcass.

Ulf brought a hand to his face. The blood-stained fingers stroked his yellow beard. His fingertips toyed with the silver cylinder where the ends of his beard were gathered. A fingernail traced the shaft of one of the runes upon the cylinder. Ulf’s thoughts drifted away from the thrill that came from physically crushing an enemy to an even greater delight: mastering an enemy’s mind; bending another’s will to his own.

The fingers of his other hand caressed the dark stone. His thoughts reached back to the time he had acquired the stone. “Acquired” was the precise word to describe the manner of his coming into possession. He had gained it through his own efforts. Skahete, a comely Wendat maiden, had drawn him to the Skraeling village. Her charms had lured many, but Ulf intended to make her is wife. They spent many evenings walking along the river or sitting upon a rounded granite outcropping while they avoided the eyes of her people.

When he kissed her and told her that he planned to make a gift of muskets, powder, ball, and steel hatchets to her father in request for her hand in marriage, Skahete lowered her eyes.

“I fear that Haronyateka will not allow it.”

Ulf considered. Haronyateka was chief of the Wendat band. Among Ulf’s people, the leader approved or disproved of marriages, but unions were seldom prohibited without a pressing cause. “Why would he prevent it if your parents approve?”

“He is the chief. Everyone obeys his will.”

“What about what you want? Doesn’t that matter?”

“It matters to me, but it does not matter to Haronyateka.”

Skahete brought a hand over her mouth. She cupped the hand, moving it to one side, and whispered, “No one can resist the will of Haronyateka. He has a spirit stone.”

Skahete insisted that Haronyateka had a stone. She explained that the chief claimed to have been gifted the stone and he never allowed anyone to see or touch the object. It was because of the spirit stone that none could resist his will.

After they had parted for the night, Ulf’s mind continued to dwell upon the spirit stone. Wrapped in a blanket, he walked among the trees. He had to investigate Haronyateka and this stone. If such power truly existed, a man who possessed it, whose will could not be resisted, must prevail against all others. He sat against the granite outcropping and brooded upon the matter throughout the night. What would he give to obtain this power?

Ulf, in his dark trousers, leather boots, and dark green blouse, sat beside one of the ten longhouses in the village. He had watched Haronyateka for a month now. He never approached the chief but observed him from afar. He had not wanted to draw the powerful chief’s attention. The old chief carried a pouch which hung at his neck. The chief never opened the bag, but he did touch the bag with one hand from time to time.

Haronyateka stood before the entrance of the central longhouse. He said something that Ulf did not clearly understand. Ulf spoke the language of the Wendat and other Skraelings but he did not speak any Skraeling language well. He knew French and spoke English in addition to his native tongue.

The chief moved one hand to the bag about his neck. “Go. Gather the people. I will proclaim the Feast of the Dead,” he said to two young men in loincloths who attended him.

The young men raced away, calling for the people to gather to Haronyateka’s longhouse.

Haronyateka wore moccasins and a loincloth. One turkey feather stood upright in his headband. Another dangled from a silver concho tied in his long black hair. Above the loincloth, a wide belt circled his waist. Figures and porcupine quills adorned the belt. A folded, red blanket draped over his left shoulder. A strap crossed from his left shoulder to a satchel at his right hip.

The Skraelings gathered, the men in their loincloths and moccasins, the women in their dresses of leather or cloth. The men sported a variety of hairstyles. Some had plucked the hair from one side of their heads, leaving long locks flowing on the other. Some wore a Mohawk style from forehead to nape. Others had plucked all the hair from their heads except for a single lock. Nearly all wore a turkey feather in their hair. The women adorned their dresses with quills, bones, glass beads, and small shells. Many women wore cloth streamers in their hair. Skahete wore a pink streamer, a few inches of which she had woven into a braid of her hair. The rest of the pink cloth hung loose against her neck.

Ulf rose and mingled with the Skraelings. He found a position near Skahete.

“People,” Haronyateka began. “It is time. We have stayed in this place for many moons. It has been good to us. The land and the river here grow weary of our tread. We must move the village. During all our stay here, many of the people have passed from the walking way. These warriors, mothers, daughters, sons, and fathers have we laid beneath the earth or raised toward the sky to rest for a time. Before we move the village, we must move our kindred dead. We must move them to a permanent rest. I proclaim a Feast of the Dead.

“You,” Haronyateka gestured to four braves, “Skahoat, Shumenduat, Teyatak, and Yandisra. You will go to the base of the pleasant hill. You will dig the final resting place. You will go today and mark the circle. Tomorrow you will dig. I will send others to take your place that you might return to feast with us and gather the bones of your kin.”

The young man called Teyatak said, “I cannot go today. I must…”

Haronyateka cut him off, “You will go today.”

Ulf noticed that the chief had seized the pouch at his neck as he spoke.

Teyatak reacted as if struck. He stumbled back two steps. His head wobbled upon his neck. “I will go today,” he said.

“Tomorrow we feast. The day after, we prepare our dead. We will feast again before we begin the trek to the pleasant hill.”

Several men yipped with excitement. The talk among the Skraelings grew animated but joyful. Many of the children began dancing, bowing, and hopping with their hands waving and gesturing. “Prepare yourselves,” Haronyateka proclaimed.